What is Sex Work?
“A broad definition of sex work would be: ‘the exchange of money or goods for sexual services, either regularly or occasionally, involving female, male, and transgender adults, young people and children where the sex worker may or may not consciously define such activity as income-generating’. There is a widespread view that occasional engagement in transactional sex, or sexual barter, constitutes ‘sex work’…

Sex work may be formal or informal. In some instances, sex work is only a temporary informal activity. Women and men who have occasional commercial sexual transactions or where sex is exchanged for food, shelter or protection (survival sex) would not consider themselves to be linked with 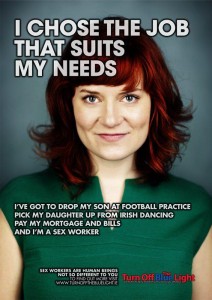 formal sex work. Occasional sex work takes place where sex is exchanged for basic, short-term economic needs and this is less likely to be a formal, full-time occupation. Commercial sex work may be conducted in formally organised settings from sites such as brothels, nightclubs, and massage parlours; or more informally by commercial sex workers who are streetbased or self-employed.” (UNAIDS Inter-Agency Task Team on Gender and HIV/AIDS, 2005)

How dangerous is sex work?
Sex work is one of the most dangerous professions you can have. Often there are situations that put you at risk for violence, because of the isolating factors of the sex trade. There is an amazing Sex Work Handbook that will help sex workers be safer.

What is a Bad Date?
A Bad Date is when a sex worker has been raped, assaulted, robbed by a client, or something scary, creepy or unsettling that you would want another worker to avoid.

Where can I read the Bad Date Book?

Why do sex workers report Bad Dates?
They want to help others avoid the same dangerous situation.

How can Bad Dates be reported?
There are many options for reporting a Bad Date, they are:

Will my identity be kept confidential?
Yes.

Is my report confidential?
No. We intend to share it with others, but we will not share any information that can lead to your or the sex worker’s identity.

Can I report a friend’s or a client’s Bad Date?
Yes.

The most recent Bad Date:

Bad Date: On the evening of March 11, 2014, a female sex worker was picked up by a 65 year old 6’2″ Caucasian heavy set man with white/silver hair with blue eyes and who had 2 tattoos on his forearms that look like badges in a newer model, silver standard transmission truck near a bank in downtown Red Deer. She indicated that he wanted to pay her $1,000 for crack cocaine and sex. She agreed and they drove to Lacombe. Throughout the night, he became more agitated and aggressive with her. He was very impatient and was exhibiting suicidal behavior. He stole the money he had paid her, she was physically assaulted and held against her will for over 6 hours. He would not let her use the phone to call for help or a ride.

The woman was eventually able to get out and reported this Bad Date at the Turning Point office the next morning.
The man may also drive a small grey car (4 door)